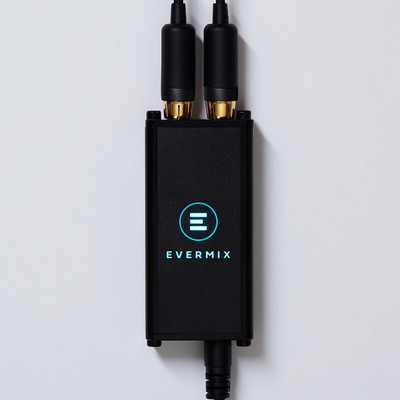 The EvermixBox4 is the latest evolution of the multi-award nominated portable hardware for recording and livestreaming - already trusted by over ten thousand DJs, promoters and venues around the world.

The pocket-sized EvermixBox4 plugs into the back of your mixer and into your iPhone / iPod touch / iPad / Android smartphone, where the Evermix App allows you to record the set in super high quality. After your set, share to Mixcloud + Soundcloud or save to cloud storage locations such as iCloud, Dropbox, Google Drive.

Made from aluminum and designed in the UK by specialist audio equipment manufacturers, the EvermixBox4 is light (85g) but highly durable and designed to withstand even the most chaotic DJ booth!

NEW:
Now: $499.00
Was:
Virtue Black This is the complete package—you’re going to be amazed! Featuring a stylish and easy-to-assemble black wooden piano stand with a built-in music rest and three pedals (sustain, soft,...

NEW:
Now: $449.99
Was:
The CDP-S350 delivers terrific piano sound and feel, plus so much more. It includes a huge collection of amazing Tones and Rhythms plus songwriting tools to bring your music to life. A...

NEW:
Now: $109.00
Was:
TRAKTOR AUDIO 2 MK2 (LC) Transform your iPad into a solid, club-ready DJ setup. Seamless TRAKTOR DJ 2 compatibility allows you to hook it up, rock your set, then head straight to the afterparty...

NEW:
Now: $179.99
Was:
Scarlett 2i2 3rd Gen THE ESSENTIAL AUDIO INTERFACE. Scarlett has gone platinum. Sitting on the desks of a huge global community of musicians, producers and home-recordists, the iconic 2i2 has...

NEW:
Now: $329.00
Was:
DN-300RMKII The DN-300RMKII records to both SD and USB media simultaneously – perfect for recording conferences where the client needs a copy of the recording after the event. With outstanding...

NEW:
Now: $139.00
Was:
KOMPLETE AUDIO 2 The AUDIO 2 makes capturing stereo sounds a breeze. It’s the same fantastic sound quality as the AUDIO 1, with a bit more flexibility. Plug in a pair of mics together using the...

NEW:
Now: $179.99
Was:
SCL2 The SCL2 is a highly sophisticated and flexible dynamics processor designed for easy operation and great tone. The unit can be adjusted to provide anything from smooth subtle compression to hard...

NEW:
Now: $149.99
Was:
iTrack Solo isn’t just for recording. Connect your speakers, crank up the volume and totally immerse yourself in the sound of your music, apps, video games, movies – or anything else...