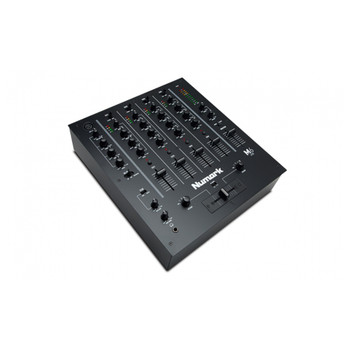 No Tax If Purchased Outside Of MN

*Free Shipping On Orders Over $50

M6 enables you to step up to a four-channel mixer. This club-style design not only works with any standard audio sources including turntables and CD players, but it also has a USB computer connection. When connected to your Mac or PC, the plug-and-play connection empowers you to mix in audio in from music-player software and record your sets into virtually any audio recording application.

NEW:
Now: $89.00
Was:
The Ultimate Pocket DJ Controller! DJ2GO2 Touch is a portable, pocket-sized DJ controller with the ability to scratch on capacitive touch jog wheels. With a built-in sound card and Serato DJ...

NEW:
Now: $249.00
Was:
The MP103USB is rack-mountable and designed for professional DJs and installations. Thousands of songs can be loaded from a computer onto a USB flash or hard drive. The MP103USB’s USB input allows...

NEW:
Now: $159.00
Was:
M4 is a three-channel tabletop mixer designed for any DJ who needs maximum flexibility. It features a replaceable crossfader with reverse and slope controls, a 1/4” microphone input with EQ, and...

NEW:
Now: $119.00
Was:
M2 is a two-channel DJ scratch mixer with all the essentials to hit the stage in Numark style. Switchable phono/line inputs for turntables, CD players, and other line sources make M2 a superb choice...

NEW:
Now: $129.00
Was:
Listening and recording vinyl to your computer is a breeze with the PT01 USB. This portable turntable is tough and durable, so you can take it with you anywhere. The PT01 USB comes with a built in...